After much consideration and contemplation, I've decided to get out of On30 entirely save for one super gift from my better half.

On30 is an insidious and pervasive devil. It leeches time and effort from your primary interests. It's SO inexpensive, SO nicely detailed, SO reliably running, and SO damned cute. It's almost impossible to resist the lure. Before I knew it I had made far more expenditures than originally intended, and the resultant collection could be best described as "Miscellaneous" !

Because I realised that I had actually succumbed to the evil, I tried to resist - but you can't do it! MicroMark would have a sale on logging equipment; the local hobby shop would receive a new shipment; another article would appear on extraction of ore using irresistably battered critters. What a farce!

Despite resenting the time it takes away from "real" modelling you try to justify the purchases and the hours you spend dabbling in a "less serious pursuit" of the hobby. "It's just a bit of fun!", you say - deceiving yourself. But, in the end, it's neither fish nor fowl. It's not 2'. It's not 3'. It can be made to look something like either one, but it always takes more effort & hourglass sand than you planned to invest. And, ultimately, it never really looks close enough to the D&RGW or the SR&RL. The bodies are too high, or too wide, or not long enough, or the trucks are not the right ones for that RR. The details are too fine, too coarse, or not the right version - so you buy bags of Grandt Line, Precision Scale, or Coronado parts to super detail the rolling stock, and realise you've spent $50 to spiffy up a $25 car. Madness!

You try to divide your time and cover all of the bases, but you have to go to work, or school, or participate in the bliss of domesticity and wedlock and there just aren't enough hours in the day for both On30 and "real" modelling. Meanwhile all of your shelf space is consumed with rectangular green boxes and transparent bags of laser cut wood. You'll keep all of this stuff for "someday" when you have more free time, but meanwhile your precious and hard won hobby capital is tied up in great wodges of plastic and oddly shaped tongue depressors with burnt edges.

The final blow comes when you realise that some of the most vocal and active pursuers of the On30 muse are seemingly infatuated with whimsical models of outhouses on flatcars, "Flatulene" tank cars, "Stumpidium" and/or "Unobtainium" mines, rolling whorehouses, or trying to fit 18 linear feet of 9" radius track into a large (and possibly odorous) pizza-box.

Only of this chapter...

Email ThisBlogThis!Share to TwitterShare to FacebookShare to Pinterest
Labels: On30, philosophy

I took apart an HO Model Die Casting 4-4-0 that was waddling down the track. Using a collet chuck and a DTI I was able to determine that the factory bored axle hole in one of the metal hubs was ~ .020" off centre.

I turned a cavity into a piece of 1" diameter steel rod stock chucked in the 3-jaw to form a cup chuck that the tyre rim would sit in without play. Loctite was used to hold the wheel firmly in place. I braced the wheel hub with the nose of the tailstock drill chuck overnight so it wouldn't shift while the Loctite cured. 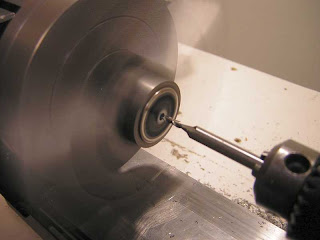 Using a tiny endmill, I bored a new axle hole of larger diameter in the true centre of the wheel. 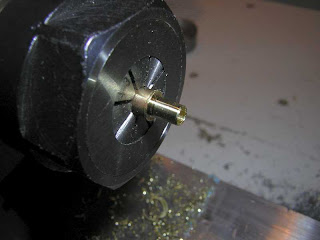 I then created a brass bushing to fill the gap between the larger hole and the existing shaft diameters from a length of brass rod held in an ER16 collet. 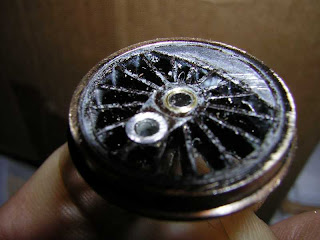 With my miniature arbour press (see previous post) I was easily able to fit the bush to the axle and the bushed axle into the newly bored wheel.

Checking with the DTI on the tyre rim I found the eccentricity to now be ~ .003", which was equal or slightly better than the remaining "stock" wheel measurements.

The locomotive no longer waddles but it does suffer from poor traction due to its rigid, uncompensated chassis design, light weight, and small motor. Unfortunately the driving axle is the forward one, which precludes any easy changes to the suspension which would improve operation.
Posted by bobcatt at 16:06 2 comments: