Oliver Clubine, owner of Ridgehill Scale Models and founder of the S Scale Workshop, passed away on the morning of April 22, 2014. 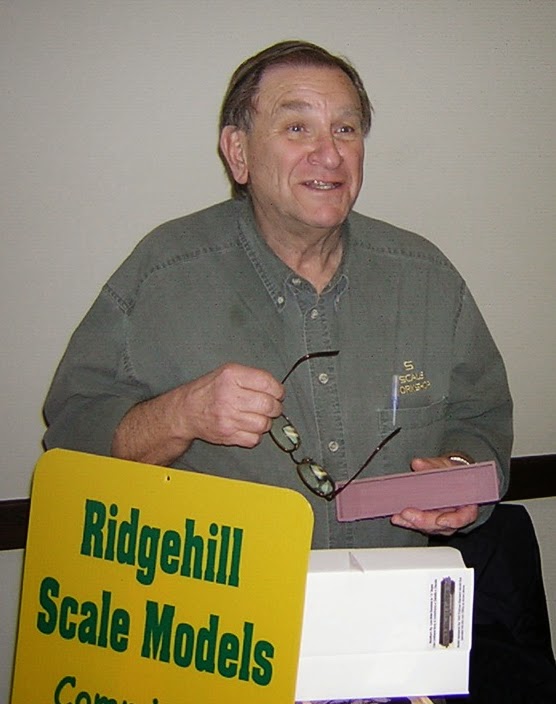 I remember meeting him briefly at the annual Copetown Train Show quite a few years ago. I was just getting into S scale, and he was THE local supplier for all things 1:64. Once you knew Oliver, you were in touch with the whole S community and a wealth of information.

Over the next few years, I attended several of his annual Christmas S get-togethers. I was dabbling with Newfoundland Railway equipment in Sn42. At one of these events he opined that I should enter one of my scratchbuilt cars in a contest, and gave me one of his over-the-glasses "Are you pulling my leg?" looks when I said I didn't think it was good enough to do so.

For many years Oliver and his model rail crew (including his son David) displayed and operated the S scale Ridgehill Central Ry at local shows. The workmanship was excellent, and I always enjoyed seeing the layout in action.

When it came time to build a new layout in a modular format, he asked me to participate; he thought I would "fit in" with the group. Frankly, I was flattered. While I tried to come up with something that was "good enough" visually and was an electro-mechanically reliable part of the whole arrangement, I always felt like I was somehow letting down the side except for the electron-pushing part of things - dealing with any DCC issues that cropped up.

One day a couple of years ago, on a whim, I paid him a visit at his race shop. We had the chance to talk about a lot of things (including model railways), and I was able to lend a hand unloading a semi-trailer full of specialty racing tyres. Shoving a 2-wheeled dolly back and forth through the tall stacks of rubber was easy enough even in the (indifferent) shape I was in at the time. Afterwards I shared a very nice, homemade lunch with Oliver and his wife Sandra. It was a good day with a friend, and I'm glad I made the trip.

My own health has been up-and-down for some time now which has limited certain activities in the hobby, especially with respect to public shows. I've missed quite a few events where Oliver was present, despite his own tribulations. Opportunities lost.

His passing gives me a lot to think about. I will greatly miss his input and enthusiasm.

Goodbye and thank you, Oliver.