Not a lot of posts lately; too busy with a variety of domestic tasks.

However, a certain amount of work was accomplished in preparation for the 2010 Copetown Train Show. The fact that the module carrier I had devised did not fit through the back door of the new house necessitated a rebuild of the unit to permit movement in to and out of safe storage. This was accomplished using scraps of material saved from other fabrication jobs. The three-section module is now handled in two carriers, each of which are manageable by a single person.

Also, in preparation for the show, a mock-up of the sugar beet loader was made using Mt. Albert strip wood and a slightly modified O scale "Red Devil" coal loader. A liberal amount of artistic license was exercised in the creation of the basic structure, primarily due to space restrictions on the module base. 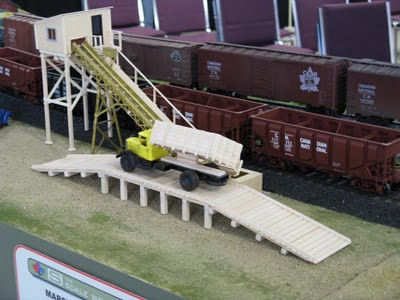 In spite of a tight fit, the loader gives a suitable impression of the method of loading the rail cars for shipment to a processing facility. It is a shame that the local sugar beet industry essentially died out in the late 50's.