I'm now a month or so into the iMac experience. The OS has been upgraded to 10.5 Leopard (top version for a G5 PPC), 50% of my images have been transferred from the WinPC, iPhoto and Mail have taken over from Image Browser and Thunderbird, while Time Machine chugs away in the background managing past configurations. Both mail and primary picture archives remain on the WinPC for the moment.

The WinPC isn't seeing a lot of use except for image edits and CAD, as I don't have comparable image manipulation software on the iMac (yet). Not a problem except for some shared directory issues still to be resolved to simplify transfers between machines. Not entirely happy with the still camera sync to iPhoto; it wants to download all images in the camera - even those that have been already transferred in previous sessions.

Oddly enough, the USB teleconferencing camera from the WinPC, which was a bit of a pain to set up under XP, worked flawlessly when plugged into the iMac. As a bonus the iPod, which has been reformatted and reloaded, no longer hangs up when finishing its sync process.

Plans are to replace the generic USB mouse, add a powered USB hub to expand connectivity, and pick up a general text with a decent 10.5 overview (likely "the Missing Manual" for Leopard).

Email ThisBlogThis!Share to TwitterShare to FacebookShare to Pinterest
Labels: computer

The final podcast of Model Rail Radio for 2010 is done. N scale was the primary thread of conversation, and several guests stopped in to chat about both model and prototype topics. The long format conversation lends itself to exploring many facets of each discussion point.

The Model Railway Show now has 4 episodes posted for your listening pleasure. Be sure to drop in to hear from some of the leading lights in the hobby. These are short and to-the-point interviews with publishers, manufacturers, and authors.
Posted by bobcatt at 18:52 No comments:

Email ThisBlogThis!Share to TwitterShare to FacebookShare to Pinterest
Labels: podcast 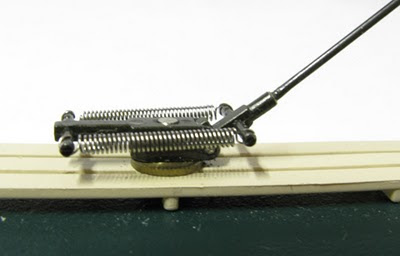 Bachmann's On30 trolley is a decent little model. It runs well and is reasonably priced. With a little redecoration, it will serve admirably on small a display layout.

I found that (as purchased) the pickup pole itself did not go high enough to contact the overhead wire at the recommended height (20' = 5"). It was a simple matter to remove the two springs, push out the pivot pin, and file a little off the foot of the pole to allow more vertical travel. This increased the angle of elevation from about 25 to 40 degrees.

But, in the end, there may be no easy way to make the factory pole to collect power from the overhead wire...
Posted by bobcatt at 18:11 2 comments: