It has been a long time between posts (again), I'm afraid. Not that things haven't been happening; simply too much going on to allow a decent pause for reflection. However, I just took a bit of a break. So why am I tired? 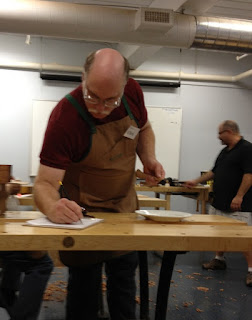 Cramming more info into my brain can quickly wear me out, but I still find it enjoyable. This weekend I was fortunate to be able to attend a seminar at Lee Valley Tools (King St. location) with instructor Steve Der-Garabedian from Black Walnut Studio and fellow student Trevor Marshall. We were building wooden-bodied hand planes in the James Krenov style.

Trevor took a quick pic of me during the class (pic at right). I'm noting the manufacturer of an adjusting hammer that Steve had on display. It's from Glen-Drake Toolworks. Steve is in the background at the right.

Steve was the instructor who taught Trevor and me how to make a traditional 12" bow saw earlier this year; another positive experience. Steve is a personable and patient teacher with a great attitude towards working with wood. I'm already looking forward to the next chance to learn from him.

This style of plane is constructed of two sides, a rear block, a front block, a cross-pin and a wedge all made from the same chunk of wood. The blank is sawn, jointed, thicknessed and re-assembled in its original orientation to preserve the contiguous look of the material's grain after being carefully glued up. There are other plane-making methods that involve keeping the solid shape intact throughout the work but I believe they are less forgiving of the newcomer.

The entire project was fairly operations intensive. We ended up using the table saw, jointer, thickness planer, and bandsaw to form the block of dense Jatoba wood into the necessary shapes to create the final assembly. Yes, all of these dimensioning steps could be done using only hand tools (but certainly not in the time available) however at our current skill level we probably would have generated much more waste and delays due to inevitable errors. Tweaking the machine-made cuts was done with block planes, chisels and cabinet scrapers. While the slope where the blade would bed against could probably range anywhere from 41 to 49°, it was critical to get the relationship between the side of the plane and this bedding face as close to 90° as possible, otherwise the blade would be skewed in the mouth opening.

Ensuring all of the shaping tasks were done accurately and getting all the bits back together in the correct alignment was a bit nerve wracking. Once it's glued up, any gross errors will likely mean having to start over from the beginning - while small mistakes could be recovered from with copious assistance from our instructor.

The most fiddly step was properly setting the mouth opening where the blade would eventually pass through. You have to plan for at least one pass over the jointer and a few passes over the fine sandpaper once the gluing is done and the clamps are released. If you under (or over) estimate the finished size of this opening, you can shorten the working life of the plane or leave yourself a lot of extra work to make it operational. In the end, some careful work with a safe-edged file, a precision square, and a lot of squinting produced the properly proportioned mouth for the blade.

Steve always emphasises that we should proceed slowly & carefully and ask questions at any time we were uncertain how to move ahead. This measured pace of progress is a refreshing change for me. This pastime definitely has a lot to teach people about patience and perseverance.

This course was intended to make a 'smoothing' plane, which takes the last fine shavings off of a workpiece to bring it to a final, almost polished finish. This level of workmanship is a lot to ask of newcomers, but I think we actually succeeded. I was able to take fine passes over a block of maple and remove just the thinnest wisps of material. Very gratifying!

I still have more work to do to refine the shape of the plane body. Steve recommends working with it for a while to see how it feels in use; i.e. which corners dig into your palm or finger, etc. Saws, rasps, spokeshaves, and sandpaper will no doubt be applied to the body to render it a more pleasing form. I couldn't resist bandsawing off the alignment pins at the extreme ends of the glued-up block and performing a bit of preliminary rounding on the stationary sander before I left the class, though...

Alas, I took no pics of the actual event - I was too busy being absorbed by the work :-) but I did take a couple of pics a few minutes ago. Here is what the plane looks like today.... 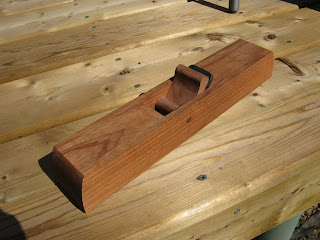 Note the fine, lacy shavings taken from the maple block. 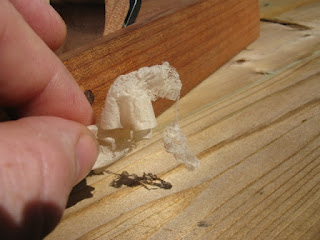 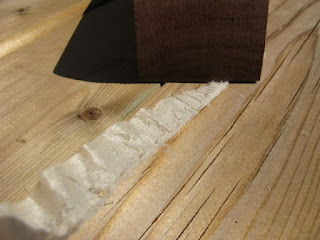 Wooden bodied planes are adjusted by hitting the body of the plane with a hammer. Hard in the centre of the back face to draw the blade upwards (reduce depth of cut) and gently at the top edge of the blade itself to push it down (increase depth of cut). To adjust the blade left and right, an even more gentle tap with the hammer on the respective side of the blade. After each adjustment, the wedge is tapped down to ensure the blade doesn't get pushed back up into the body during a cut. A bit of paraffin wax can be lightly rubbed on the sole to smooth the action.

I'll have to get used to the idea that this plane will alter with time, temperature, and humidity. It may work fine today but not next week as it 'moves' due to changes in the environment and its own wear pattern. Lots to learn, lots to remember, and lots to practise.