Thanks to my penchant for digging through piles of mouldering, tool-shaped objects, I've recently met up with a fantastically talented artisan names Nigel who restores and makes his own wooden hand planes of all varieties. I was able to visit his shop and learn a pile of cool info that would have been hard-won through mere reading. Together, we attended an antique tool show in Pickering (the next one is in November) where I was coached in obtaining a number of hollow & round planes for making a range of mouldings. I also scored some necessary bits and pieces to repair tools that I've already collected. We are going to stay in touch as I move along in this fascinating hobby.

With respect to the digging itself, I found some treats. 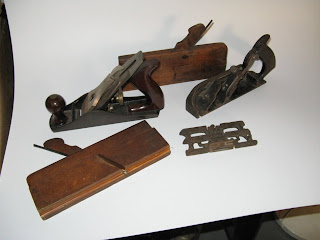 Recently, Lee Valley Tools held a series of day-long demos on joinery. I was able to make it to their Toronto West location and speak at length with woodworker John Giancola about how he approaches various tasks. During our lengthy discussion, he recommended two books - one on dovetails by Ian Kirby, and the other on a complete course of hand tool instruction by Paul Sellers. I was lucky to obtain both, although the latter of the two was the last copy (the heavily guarded display copy) in the store. Amongst many other tidbits, John stressed:

John also offered advice on how to adjust my rigid-frame coping saw to increase blade tension, and on upgrading some of the irons in my older, metal-bodied planes. It's great that Lee Valley offers this sort of unstructured event for Q&A.

Yep, it's been a while since I made a post.

Events over the last couple of months (especially) trace out a line more like a roller-coaster than a steady trend of up or down.

The joys of a semi-rural locale have manifested as septic system woes (how serious and expensive has yet to be determined), random blackouts, brownouts, and sags in the power grid, and more water in the basement  than is healthy for wood and paper products.


Due to moving things around in a mild panic during the flooding, I can't find much at the moment; pretty much everything is now in opaque plastic bins. Labelling is about to begin - if I can remember where the labelling materials went.

Speaking of bins, I was able to take a break from the chaos to help a friend move many bins of cool stuff to his new abode, discussing various aspects of storage, display and access to his collection. His library makes mine look tiny in comparison. 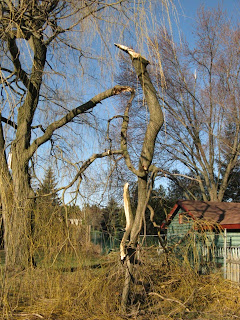 The recent weather has also proved troublesome. We've been experiencing wild swings in temperature and humidity, a particular combination of which resulted in an ice storm that damaged the two largest trees in our back garden. The willow lost three large branches, and the birch two. Had I actually gotten the garden railway track installed last season as intended, a large section would have been smashed by the willow's downed limbs.

Luck or fate? I don't really care at this point - tardiness appears to be its own reward. Maybe I can salvage some workable raw material.

A visit to mum & dad resulted in me being trounced at cribbage yet again. Much good home cooking was consumed, and I was able to refurbish a handful of countersink drills for dad's own woodworking projects.

More on wood in a moment...