a bit of British

A short break from Supertrain. I was going to stay home this weekend, but decided to take in the 2012 Great British Train Show in the neighbouring city. I'm glad I did. As usual, there were many examples of fine modelling, and the chance to outfit and entire OO layout with locomotives and rolling stock from the vendor tables. I once more resisted the latter.

One thing that I didn't expect to see was the following:

Lineside Lorries, 4mm scale cardstock vehicles. Yes, cardstock. They were on display at Brian Fayle's micro layout "Underneath the Arches". These 'plans kits' are from the 1940's. You got a set of plans, cut out all of the pieces in various thicknesses of cardstock, gave each piece a coat of shellac, and laminated them together with 'Seccotine' fish glue. The wheels are the only commercial parts; they are whitemetal castings. The glass is celluloid film, sandwiched between layers of card. The models that Brian had on the table were the better part of 70 years old. Impressive longevity... 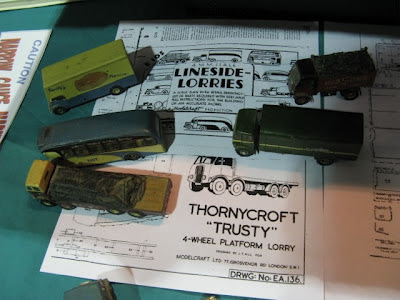 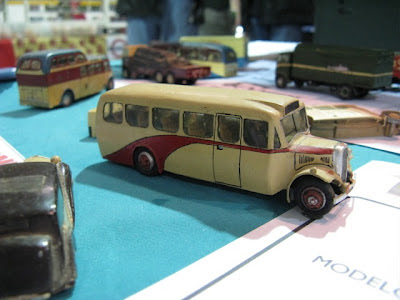 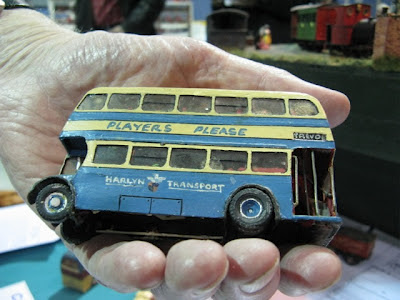 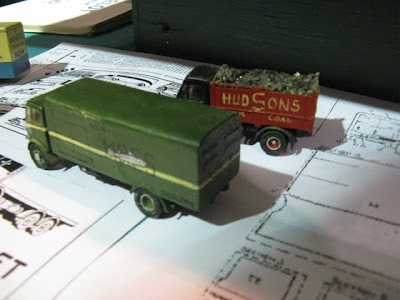 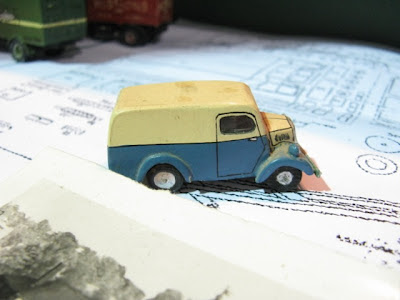 I came across a well weathered wall while I was on holiday. Stood back about 20 feet and took a shot. This should represent looking at an O scale wall from about 4". Notice what isn't in the picture. 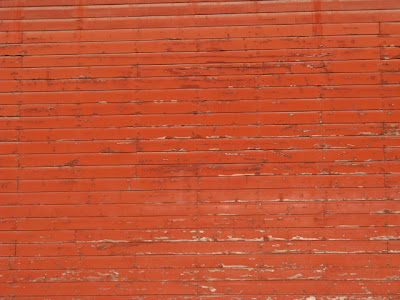 You guessed it; no nail holes. You can make out the odd nail head, and easily see indications of where the studs are. Lots of flaked paint down at the bottom, and lots of chalky (or dusty, the rain doesn't hit it up there) looking paint at the top. This illustrates the importance of modelling something by looking at real world references rather than based on impressions, memories, or word-of-mouth approaches. Find the actually item you want to model, or take a picture of it in good lighting conditions, and try to emulate what is really there.

There I was, many thousands of miles from home, in the middle of an unfamiliar (but enjoyable) train show. A complete stranger walked up to me and, by way of introduction, spoke the words of a running gag that we enjoy on the Model Rail Radio podcast. This gentleman had heard I was going to be at Supertrain and had wondered how he would recognise me. Lucky for him I was wearing a red-sleeved baseball jersey with a huge MRR logo on the front.

It was a real treat for me to meet Andy Thomas, an N scale modeller from out west, who listens to the podcast. Andy is busy with a layout project which he is documenting on his own blog site  http://nscalefortstjohnsub.wordpress.com/
I hope that Andy can find the time to call in to the show and bring everyone up to speed on his layout plans; they look interesting and I'm sure he has some knowedge to share.

The primary reason to visit Gary Graham's place was to see the progress on his On2/On3/Proto48 layout. His track design and scenery crew are empowered to make changes deemed necessary to ensure smooth running and appropriate landscape appearance. The track plan is not written in stone, and has undergone many changes. Gary has stopped trying to paint the fascia as the frequent plasterwork by the crew stains the fresh coat almost as soon as he turns his back on it. The arrangement (for the moment) is point-to-loop, with On3 on the high-line and On2 on the lower alignment. I would really enjoy coming back and seeing this layout when it is nearer to completion. 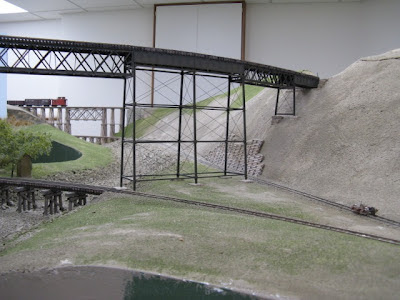 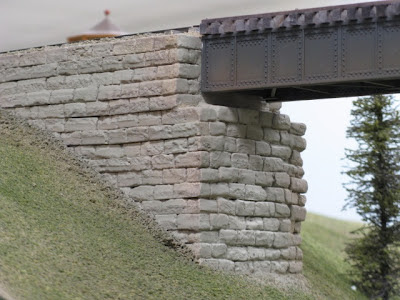 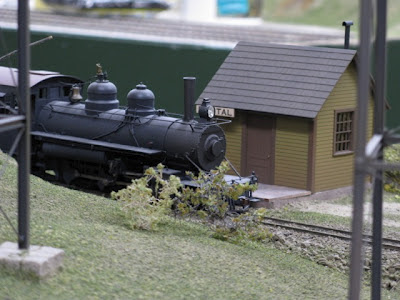 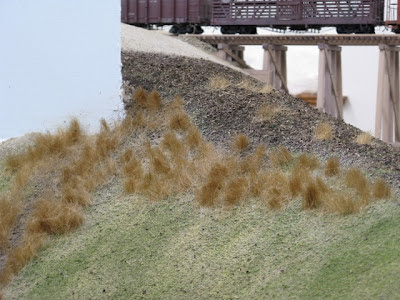 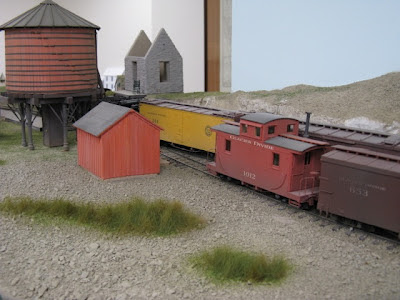 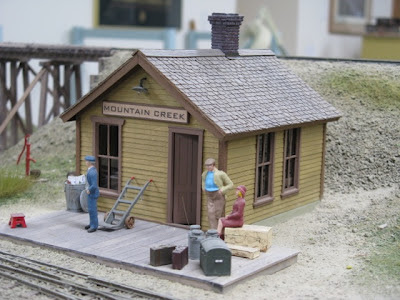 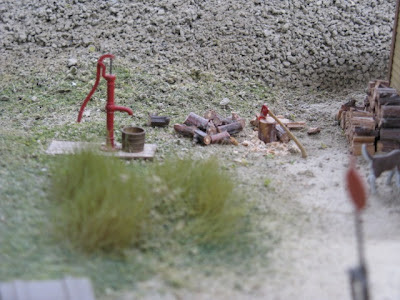 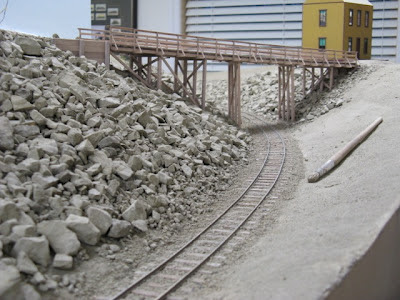 The first visit on the evening of day one took us to Gary Graham's place. Bill Kerr and Gary have been building an entry for the newest feature of Supertrain, the diorama display. My host Dean and I got a good look at the diorama before the show itself. The track is handlaid for 2' gauge in O scale. The railcar is a model of a Maine prototype. Foliage is from Selkirk Scenery fall colours range. 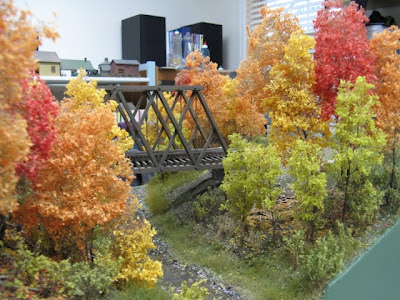 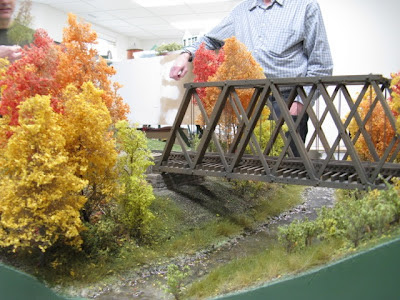 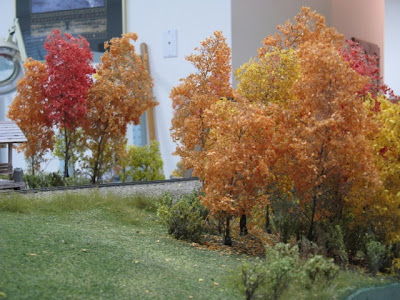 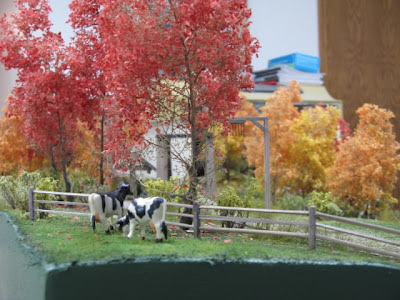 Gee, those cows look familiar... Why, they are S Scale cows! All the way from Trevor's surplus stock yard in Ontario to the wilds of Calgary to populate an O scale diorama! 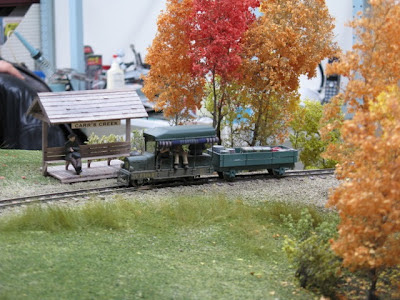 Well known British Columbia modeller Tom Beaton likes to build dioramas in unusual containers. Here are two examples that he had on display with the South Bank Short Line group at Supertrain. The first one is in a section of Sonotube normally used as a concrete form for posts. The second is in an old milk can that was partially rusted away. Nice conversation pieces for the living room... 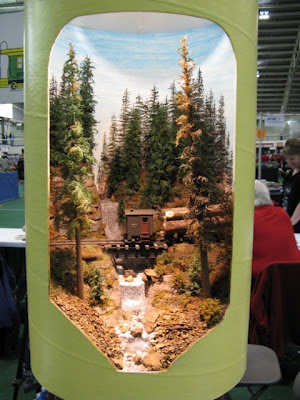 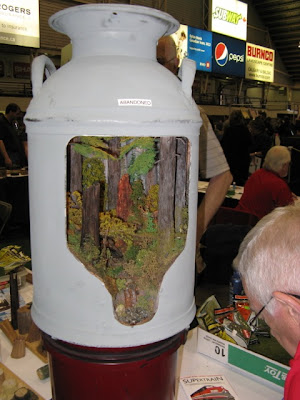 I arrived in Calgary for Supertrain 2012 on the Wednesday afternoon before the show. I figured that day one would be used up getting sorted out and settled in. Local Calgarian Bill Kerr, owner of Selkirk Scenery and a talented modeller, had other ideas. Bill wanted to show my gracious host (Dean) and me some sights before the show. Our second visit of the night was to see Herbert Stroh's impressive 2-rail O scale Canadian Pacific layout. Herb's presentation and quality of work is excellent, as you can see from these snapshots...

A capitalised title to one of my blog posts; unusual for me. Capitalisation is formal and symbolises importance. Supertrain IS important, though. It is simply the best show of its kind in Canada. What kind? It's a model railway show. This is a big deal? Yes, because it's


a model railway show,
not
a toy train show.

True, I have not been to every single show in the Great White North to make this comparison irrefutable, but I can form an opinion based on experience and observation. The cities of Toronto, Ottawa, and Kingston are the major centres I've visited to take in their events - and a good number of smaller locales, of course. From hotel lobbies to trade-show complexes to agricultural barns, I've paced over hard concrete and drab carpet. Until Supertrain, I held firm in the belief that Canadian shows all shared the same damning descriptor - they were "average".

Of course there are always bright sparks - certain spectacular models on display, certain engaging and informative clinics presented, certain captivating layouts revealed. But the overall sense of each show remains somehow less than it could be.

Supertrain 2012 was a well organised, well presented, and well attended show. Four soccer fields worth of it. Was it as big as the Amherst show in Springfield, MA? No. Does it need to be? No. Supertrain was advertised on the radio, had 19 huge banner ads hanging from highway overpasses around the city, and sported a crew of dedicated friends-of-the-hobby working tirelessly to ensure its success. Modellers and/or displays came from Alberta, British Columbia, Manitoba, Saskatchewan, Ontario, and Washington state to my personal knowledge. There were probably others I missed meeting...

Free clinics introducing various aspects of the hobby to newcomers ran for several hours on both days. Many live demos of techniques were going on nearby, such as making trees, weathering, structure building, super-detailing rolling stock and so on. A large area was set aside for kids to play with trains, Lego and other appropriate amusements. Members of the South Bank Short Lines group assisted many children in assembling their own cardstock structures; a station and an engine shed.

A wide array of layouts were on display, ranging from efforts by young children and families to large clubs. A great selection of manufacturers and vendors from around Canada and the US were also present, with staples like Athearn, Soundtraxx, Bowser, and Badger showing their wares.

How can a city of 1M people put on a show that attracts nearly 15,000 visitors while a city with nearly 2.6M at the core and another 4M in close proximity can only manage 20% of that attendance? How is it that there are nearly 3,500 active model railroaders in that same small city? I'll put it down to the efforts of the Calgary Model Railway Society. The people from the CMRS, local operating crews, and associated club members that I met before, during, and after the show were all enthusiastic and willing to share their time and knowledge. Despite many of them having home layouts and regular operating sessions that demand their time and attention, they understand the value of positively presented public events and the associated efforts necessary to make them happen.

Thanks, Supertrain, for changing my mind.

The sector plate is progressing. See the sector cut and cork down on Trevor's blog. Still to go is the crank mechanism. I'll need a bit more thinking time to sort out the details.

We are also going to add a flip-down tray to extend the plate deck. This will allow a locomotive cassette to slide around on the deck to reduce handling of the engines. The reason this extension has to be a flip-up-down is so that it doesn't block the lid of the nearby chest freezer.