Just bought a nice, 15 light French door at the local "Re-Store" to use in one of the bedrooms of the condo. The door's surface has quite a lot of dent and scratch damage caused by mis-handling during salvage, but all of the glass is intact. Since the door will be painted, these cosmetic flaws are unimportant.

I was able, with the aid of a long metal straight edge and circular saw equipped with a planing blade, to cut 1/8" off each edge of the door to get it to fit into the existing door frame. This allowed for fresh dados to accomodate the hinges and kept everything nice and symmetrical. A quick trim of the top and bottom of the door completed the re-sizing.

The only major stumbling block is the height of the passage set. The position of the new door handle is lower than the existing door frame location. The door frames in the condo are one-piece metal assemblies. The strike plate location is fixed and cannot be moved up or down without a great amount of grinding, welding, and cursing.

The easiest solution is to raise the handle position in the door. Using a trepanning cutter in the drill press, I produced a number of pine slugs to fill in the existing holes. These have been glued and clamped into the body of the door, then shaved flush with a broad chisel. Using an appropriate hole saw and spade bit, I will re-drill the door at the new passage set location. Any remaining voids, dents, and scratches in the door will be filled with wood putty, sanded, and primed. 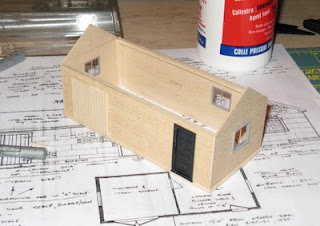 This speeder/MoW shed is based on the one at Madoc, ON. I've added an extra window to the back wall of the "lunchroom/office" end to add a bit of visual interest as our modules are viewable from both sides. Siding is 6" wide scribed sheet that I found in a box of leftovers. Door and windows are Grandt Line castings (note the especially old black plastic door).

In the 50's the shed was heated by an oil stove so a suitable oval tank will need to be built outside the structure and a metal chimney will be poked through the roof. Later in life the shed lost the chimney (for unknown reasons) and the sides were covered in Insulbrick. Luckily, I'm modelling the 50's so I won't have to deal with the incredibly ugly appearance of Insulbrick siding.
Posted by bobcatt at 15:58 No comments:

Dad purchased a Bachmann On30 porter (0-4-2) to use on his proposed 7mmNG, Welsh quarry inspired portable layout. From KeyKits in the UK, we obtained suitable Anglicising pieces (Wrightlines W996 cab kit and W963 chimney). The conversion itself was prompted by Brian Fayle's 7mm micro-layout workhorse and other examples from his website. The Bachmann chassis is a known "good runner" so we anticipate good service.

It did run well right out of the box, however, once the whitemetal cab pieces were substituted for the plastic details, the ends of the siderods started banging into the underside of the cab floor. "Too much weight!" was the initial thought but, upon partial disassembly, it was observed that one of the rear axle U-grooves in the plastic frame was deeper than the other. This caused the rear axle to tip out of true with respect to the front axle and the engine developed a list to one side.

This tilt caused the engineer's side of the cab floor to interfere with the siderod motion. ACC'ing a ~.015" thick pad of shim brass at the bearing surface of the over-deep U-groove solved the problem. Now the engine sits level on its axles and travels without any apparent binding.

The new cab assembly is secured to the stock footplate with flat head 1-72 machine screws countersunk into the underside of the floor. A stemwinder brake stand has been added to the footplate. The Bachmann steam dome needs to be removed from the saddle tank, and a simplified water fill hatch needs to be fabricated. The engine can then be painted and lined for service.
Posted by bobcatt at 11:56 No comments:

more dip than a cocktail party

Well, not anymore. With judicious assistance, I finally managed to remove the pronounced dip at one end of the S scale module. Several possible approaches were considered before undertaking the work.
1) lever the extruded styrofoam "bedrock" up from below <- brute force and stupidity
2) hack into the structure sideways at the base of the ballast slope and jam in some shim material <- messy and imprecise
3) strip the rail off the affected area, stack new ties on top of the old, and carefully sand level. <- least destructive and easiest to verify results.

Ultimately choice #3 was pursued. About 2'4" of rail was removed and new sugar-pine ties were glued on with full strength Weld Bond adhesive to fill the depressed area. The opportunity was taken to re-align the rails slightly to eliminate a drunken wander in the main line. 50 grit paper was Super 77 spray adhered to one side of a 4" wide, 2' long, flat plank. 150 grit paper was likewise stuck to the other side of the plank.

The glue was allowed a long cure time before the ties were attacked with the 50 grit until nearly down to the original tie height at both ends. Sanding strokes were made perpendicular to the right-of-way to limit stress on the small gluing surface areas. Frequent checks were made to ensure that the new ties were not getting a crown or being tapered towards one side or the other. Once the old tie colour started to show through the thin skin left by the new ties at the extreme ends of the fill area the 150 grit side was used to clean up and de-fuzz the surfaces. 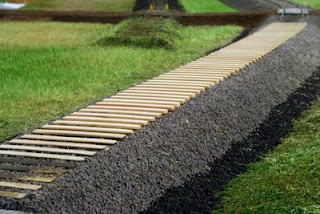 You can see how pronounced the dip was close to the module end by the rapid increase in fill-in tie thickness. Next the ties were stained with Floquil's "Tie Brown". What remains is the careful replacement of the rails to ensure they meet up with the previously marked positions at the end of the module, and the re-application of ballast around the new ties. A quick trip under the module with a soldering iron will re-attach the buss feeders, and re-testing will be done well in advance of the Christmas Train Show.

Why did the dip appear? Based on the sunken appearance of the ballast along the centreline of the ROW, I can only assume that the eye-dropper application of thinned adhesive was too agressive and the Tentest subroaded contracted as it dried up. This pulled the cork and ties downwards immediately after the end of the trapezoidal pine profile block at the end of the module (which remained flat & level).

Near the siding end of the split-rail fence, a copse of evergreens has sprung up. Short lengths of styrene tubing have been glued into the foam base to ensure rapid installation and removal of the trees for transport. There are twelve MountainView Depot conifers which are a far better looking and more consistently produced than anything I can manufacture.

Here's a product shot from the MountainView Depot gallery:

I'll need more of these, in various sizes, to add depth and texture to the rest of the module. In addition, a good number of flowering shrubs and low scrub will have to be applied to balance the scene.
Posted by bobcatt at 19:28 No comments: