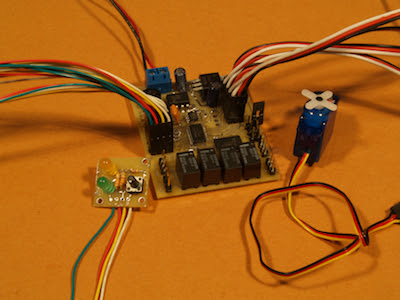 He is offering the schematics and source code free at the moment. I understand that pricing for pre-assembled units is to follow soon. The possibility to control other devices (turntables, signals, gates, etc.) is also present with code modification.

A short video of a beta unit in operation is available courtesy of the Model Railcast Show.

The Model Railcast Show is coming up on episode #50. Recent podcasts have covered benchwork construction and DCC topics.

The informal, ad-lib presentation style may not appeal to every taste but there is certain charm and spontaneity that you simply won't get with a script. Listening to the show often feels like you're just having a bunch of (knowledgable) guys over to your basement layout for a work session.

I have to applaud the primary host, Ryan, who is sticking his neophyte neck out every single show - letting everyone know he is not an expert model railroader. The honest (and sometimes basic) questions he asks his guests have forced me to re-think some of the things I "know" about the hobby and how to approach it. This has improved my understanding of areas I had taken for granted, and made me appreciate many aspects in different ways.

I find myself looking forward to each weekly installment. You do not need an iPod to listen to the programs; Quicktime, iTunes, or an mp3 player will do fine.
Posted by bobcatt at 22:59 No comments:

There continues to be a lot of discussion about what it really means to be a model railroader. Frankly it's going mean a different thing to each person. It doesn't follow that any one approach or definition is going to be better or worse than any other.

It really is too bad that so many people are spending so much time in specious arguments backed with dubious data. In the end, it's the person who isn't spending all of their time yakking it up in the discussion forums who is actually getting models built and running trains.

And that's what this whole exercise is supposed to be about, isn't it?
Posted by bobcatt at 22:36 No comments:

Having some time not otherwise occupied, I finally had a chance to hook up a LocoBuffer-USB from my PC to a Digitrax DB150 command station/booster. The free JMRI software allows you to program decoders, control the command station, operate virtual on-screen throttles, create CTC panels, and many other functions. Full details of hardware & OS support are on the website.

My main reason for implementing this software and hardware is to program decoders. I have one diesel, an S Helper Service SW9, with two decoders (Lenz Gold-JST & Soundtraxx DSD100LC-EH) which is a particular pain to program and keep track of the CV values. Hopefully I will be able to synchronise the sound & motion better using the graphical programming "DecoderPro" portion of the JMRI package.

I did notice that there is a mechanical problem with the diesel that I was unable to see or hear in the large auditorium of the last show. I will have to disassemble the loco to check out the issue. It seems that one of the pickup wipers is "clicking" during the wheel rotation.