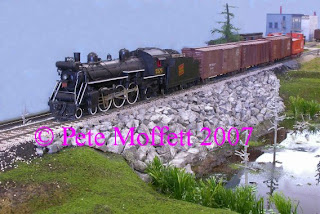 Soundtraxx DSD and Tsunami equipped Moguls and 10-wheelers were pacing back and forth along the rails to the delight of the attendees, some of whom remembered the presence of steam on local rails. Even a Pacific travelled around the trackage for a while. Pete arranged a photo of it crossing Andy's causeway module.

In addition to completing a few more bits of work on the stub turnouts of the wye, we managed to do quite a bit of rework on the river gorge module set. The alignment of the track is much improved, and the trestle approach spans to the bridge now have proper ties in place.

Despite our conflicting work schedules, we really want to have the modules in better operational shape for the upcoming Narrow Gauge Madness show in Schomberg, Ontario (April 21st). I realise that the HO scale Weyerhauser boxcar is an anachronism in the scene, but we just wanted to test the setup with a piece of rolling stock attached to the motive power and it was handy.

It's almost impossible to get a photo of the river gorge when it's in the workspace; it's just too long. Both the BLI C-16 and Bachmann outside-framed Consolidation locomotives successfully negotiated the curves throughout. We were unable to test a K-27 due to an electrical fault in its wiring harness. Hopefully it will also run without the need for modification.